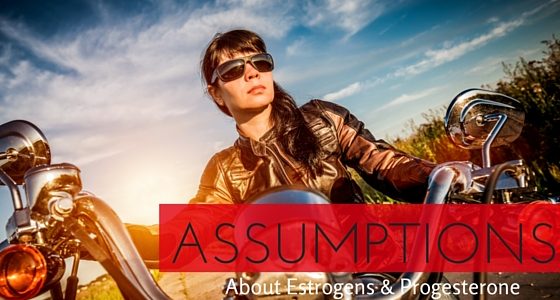 Have you ever made an assumption about something or someone that turned out to be incorrect?

I make assumptions all the time.

Yesterday, I assumed that the email coupons were automatically added to our frequent shopper card.

I assume that the stranger coming to ring my doorbell is trying to sell me something.

I assume that someone who is not texting me back is upset with me or ignoring me.

Assumptions can be dangerous . . .

. . . like when I assume the blinking right turn signal on the car ahead of me means that car really is going to turn right at the next possible intersection.

When you and I make assumptions, they usually have fairly benign consequences. We may be embarrassed or have to apologize or just feel stupid. Our assumptions could lead to a fender bender or possibly something worse.

The medical science community is making some pretty big assumptions when it comes to hormones. As a pharmacist, I have a duty, in fact a legal obligation to tell my patients about the possible risks and benefits of medications they are taking. I want to make those risks and benefits clear and understandable, whether or not you have a Ph.D. in biochemistry. Here are some assumptions that drive the warnings you’ve heard about hormones.

Assumption #1 All Estrogens Are Created Equal
There’s a huge assumption in the medical literature that all forms of hormones that are generally called “estrogens” are identical in their benefits, side effects, adverse effects and risks. This assumption is posted in the package insert of every FDA approved estrogen product in the U.S. market and explicitly states that the same warnings and guidelines apply to all estrogens.

A huge study of nearly 160,000 women conducted by the U.S. National Institutes of Health beginning in the early 2000s is the fountainhead of all the assumptions about estrogens in the medical literature. This landmark study, called The Women’s Health Initiative, looked at the treatment of post-menopausal women with either Premarin® or Prempro®. To understand the assumptions, let’s look at what these two hormones actually contain.

Premarin®
Premarin® is a combination of estrogens that come from pregnant mares’ urine. This medication was developed in the early 1940s as an effective treatment for menopausal symptoms. Sales of Premarin® began to skyrocket in the 1990s when researchers found that it helped reduce the risk for osteoporosis, which dramatically increases after menopause. In the late 1990s and early 2000s, Premarin® was the #1 or #2 most prescribed drug in the U.S.

Premarin® contains estrogens but which estrogens and how much is uncertain. The FDA admitted in 1997 that Premarin® is a very complex mixture of at least TEN different estrogen-related compounds and that the estrogen activity of each of these ingredients is difficult, if not impossible to clearly establish. Of the ten estrogens contained in Premarin®, estradiol is chemically identical to the human estrogen which is the most prominent. The rest of the estrogens in Premarin® are either horse-specific estrogens or breakdown products from horse estrogens.

The giant assumption about estrogens is that Premarin® is the SAME as Estradiol.

This assumption is that the complicated mixture of at least ten horse estrogens with whatever other contaminants and non-estrogens might be contained in horse urine, are essentially the same in function, risks and benefits as the estrogen found in humans.

Assumption #2 All Progestins Are The Same

Prempro®
The second hormone studied extensively in the Women’s Health Initiative, medroxyprogesterone acetate, is referred to as a progestin which means it behaves similarly to human progesterone. Women in the WHI were divided into two groups. One group took Premarin® and the other took Prempro®, which combines the horse-urine-derived estrogen of Premarin® with medroxyprogesterone acetate. The progestin is added to Premarin® in order to decrease overgrowth of the lining of the uterus, a common problem in women who take only estrogen.

The giant assumption about progestins is that medroxyprogesterone is same as progesterone.

These two big assumptions have led medical researchers to extrapolate the results of the Women’s Health Initiative study – especially the part about Premarin® and Prempro® causing increased risk for heart attack, stroke and breast cancer – and to apply these results equally to all forms of estrogen/progestin hormone replacement therapy.

Don’t assume you know what you are assuming!

Talk with your doctor. She knows that your health and well-being are too important to base decisions about them on a single study or worse, some shaky assumptions. Only you and your physician have the information necessary to decide if you need hormone replacement therapy . . . and which hormones are best for you.