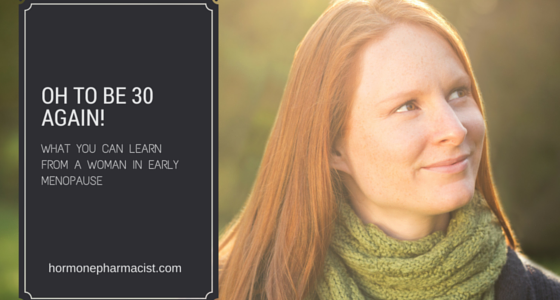 I had a conversation yesterday with a woman who went into early menopause in her thirties. Her doctor put her on transdermal estradiol and norethindrone. She did very well on that hormone combination until she started experiencing some symptoms that her doctor thought might indicate her susceptibility to blood clots. Since she stopped using hormones, she experiences night sweats on a regular basis and has learned to cope with them. This conversation made me wonder out loud, “Why do women who go into early menopause generally not bat an eye at hormone replacement while women who go into natural menopause at age 51 (on average) worry so much about the risks of hormones?”

The answer to that has a lot to do with the early menopausal woman’s doctor and the information she’s being given. Doctors who see patients going into early menopause don’t hesitate to prescribe hormone replacement. They know that hormones are the most effective treatment for menopause of any kind. They also know how difficult life can and will be for a woman whose ovaries have stopped making estradiol and progesterone. The loss of those hormones can cause crippling hot flashes, paralyzing anxiety, zombie-making insomnia, painful vaginal dryness, relational strife and a long list of other issues. Menopause is not a disease but a natural transition in the life of a woman. However, menopause can be disruptive in many cruel ways. The tools to treat menopause are readily available. Why not use them?

For women who go into menopause at 50 the reason is, “Because of the risks of breast cancer, heart attack and stroke!” But the woman who goes into menopause at 30 doesn’t seem to be nearly as concerned about those risks.

The primary source of the fear of hormones is the Women’s Health Initiative study. That large scale study looked at hormone replacement in post-menopausal women and came to the conclusion that it wasn’t worth the risks. Unfortunately, the headlines badly overstated the results of that study and the resulting hysteria has led to needless suffering for many women since 2002 when the study was stopped.

Three issues regarding the WHI that put its results into perspective:

There are better alternatives available to treat menopause symptoms, alternatives that are cleaner and more targeted to replacing the specific hormones your body used to make.  Here’s a graph from the New England Journal of Medicine that shows how women taking both conjugated equine estrogen (CEE) and medroxyprogesterone (MPA) in the WHI fared worse than women taking just the estrogen.  This graph uses data from women 50-59, early in menopause. 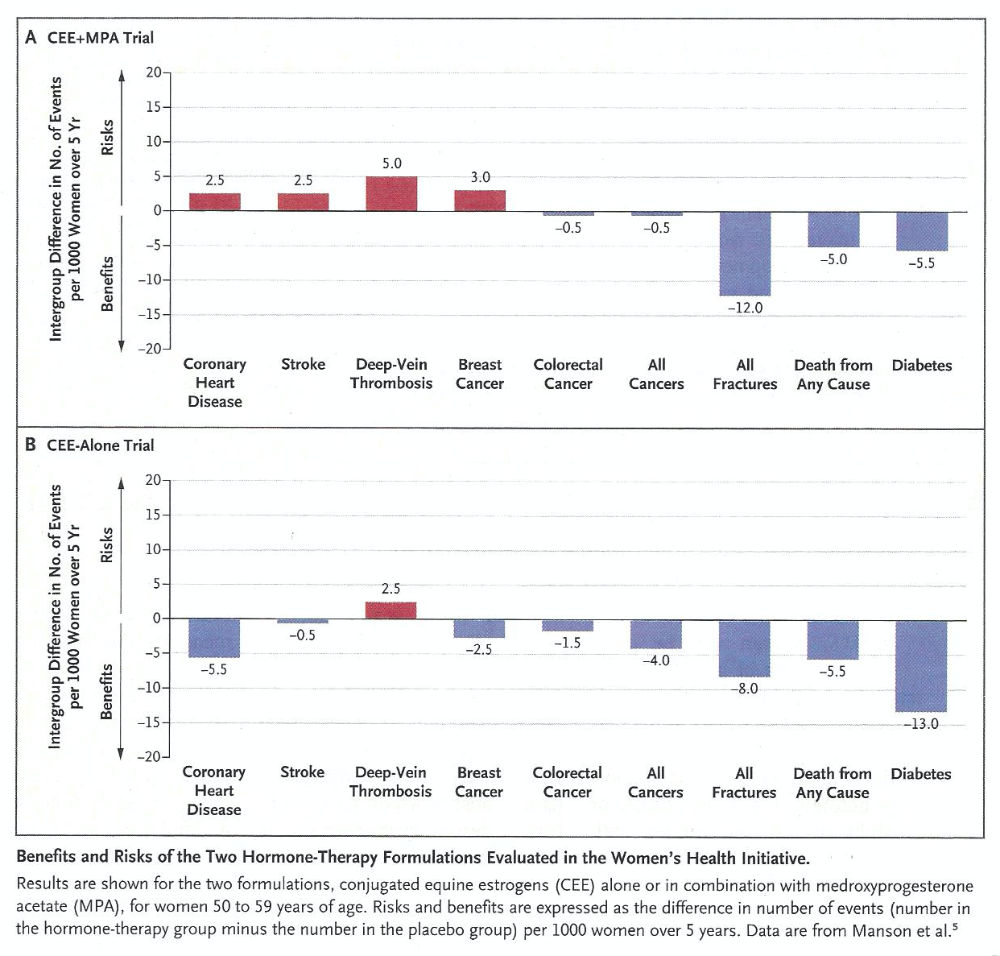 Hormone replacement at menopause makes a lot of sense for women in their 30s. These women face years of very difficult symptoms, as well as increased risks simply because they don’t have the same level of estrogen and progesterone they once had. A woman of 50 who is going into menopause “naturally” faces the same symptoms and the same risks. Hormone replacement is not for every menopausal woman, but many women in menopause, regardless of their age, can benefit from the most effective menopause treatment available, hormone replacement.

Whether menopause comes at age 30 or 50, hormone replacement is still the most effective way to reduce or eliminate its symptoms.  Since the WHI, several studies have confirmed the benefits of hormone replacement early in menopause.  These studies show that the loss of hormones can have a negative impact over several years after the onset of menopause and that replacing hormones earlier is better than later.