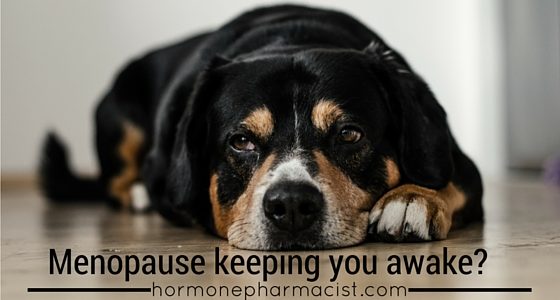 If you deprive someone of sleep for several days to a week, it’s considered torture.

Sleep deprivation can actually kill a human being.

Beyond the threat of dying directly from lack of sleep, not getting your shuteye is known to have serious, even life-threatening, indirect effects including: [1. “10 Things To Hate About Sleep Loss” webmd.com]

I didn’t sleep well last night. Woke up with a headache and the feeling that I couldn’t get enough air. I’m pretty sure have sleep apnea. It’s common for men my age. I’m 52. I snore ferociously and my wife says that I stop breathing and snort, wake myself up and roll over to go back to sleep, then start the process all over again. She got me some essential oils that are supposed to get me to breathe better when I rub them under my nose. They help but only for a few hours. I’ve tried a number of remedies for my snoring, including homeopathic SnoreStop® tablets, BreathRight® strips, raising my head on more pillows, sleeping on my side. Nothing makes much difference. My wife has noticed that if I have a glass of wine or a gin and tonic at dinner, my snoring seems to be worse. I don’t know whether drinking water instead of beer improves my sleep. It might. This has been an issue for me for several years. OK, maybe more than that, but I am finally admitting that it’s a problem. Sleep is crucial and I am not getting enough of it. I am also not getting enough oxygen in my system, which interrupts my sleep. That just doesn’t sound right to me. That can’t be good.

It’s estimated that 22 million Americans suffer from obstructive sleep apnea, 80 percent of whom are undiagnosed. [2. The American Sleep Apnea Association] The American Sleep Apnea Association says sleep apnea “ . . . when left untreated can lead to high blood pressure, chronic heart failure, atrial fibrillation, stroke, and other cardiovascular problems; it is associated with type 2 diabetes and depression; and is a factor in many traffic accidents and accidents with heavy machinery, owing to the persistent drowsiness . . . too little good sleep appears to be as much a factor in obesity as too much food and too little exercise.”

It’s taken me a while to admit that sleep apnea is more than just a little problem. I am pretty tired a lot of the time, especially in the afternoon. Sometimes I get sleepy on the short drive to the grocery store. Sleep deprivation is affecting every day of my life, my nights, my marriage. We have slept in separate rooms for a long time. My wife gets pretty anxious when we plan to stay in a hotel or at someone’s house and we have to sleep in the same room. She knows that she’s not going to get any sleep. She’s tried covering her ears with a pillow, which never works. Wax or foam ear plugs hurt after a while and don’t block out everything. Over-the-counter sleep aids are OK, but her sleep isn’t the best. Melatonin helps a little, but it’s hard to find the right dose that doesn’t cause a hangover.

So I made an appointment with a doctor and got a referral to a pulmonology (lungs/breathing) specialist to find out if I really have apnea. I haven’t gotten into the pulmonologist yet – he is booked for months. I’m pretty sure he will tell me what I already suspect. I imagine that he will prescribe continuous positive airway pressure (CPAP). It’s the most common and by far the most effective treatment for sleep apnea issues. My dad has sleep apnea and gasped and snorted for years before being officially diagnosed. Once he was officially diagnosed, his doctor put him on a CPAP machine and his life has never been the same. It took some time to get the adjustments right. It took him a couple weeks getting used to the machine and sleeping with a fighter jet mask strapped to his head. Once the initial hurdle of change had passed, he says his life is 100% better. He feels more rested, gets up to go to the bathroom less and sleeps through the night. He has more energy during the day and is more alert. He can even watch a whole movie without falling asleep, which he never could before. My doctor could prescribe an oral appliance, which also can be effective in certain cases and is maybe less difficult to get used to. Or there may be other treatments that I don’t even know about.

So why am I telling you all of this? Because you and I may have a lot in common.

Does your husband struggle with breathing at night? A lot of us men do.

How about you? Are you sleeping well?

Do you wake up frequently? Maybe because you are so hot that the sheets and your pajamas are soaked? Are night sweats and plain old insomnia robbing you of a great, full nights’ sleep, not just once in a while but most nights? Are you waking up at 4:30 or 5:00AM and finding yourself staring at the ceiling, unable to get back to sleep so you can feel rested at 6:30 when your alarm is set to go off?

Or maybe you suffer from the same sleep issue I have.

Ever wake up gasping for air?

Does your partner accuse you of snoring?

A review article in the Journal of Clinical Sleep Medicine suggests that menopausal women suffer not only from sleep issues caused by hormone deficiencies and hot flashes/night sweats but also due to sleep apnea. [3. <a href=”http://www.aasmnet.org/JCSM/Articles/010312.pdf”Eichling PS; Sahni J. Menopause related sleep disorders. J Clin Sleep Med 2005;1(3):291-300.</a>] This article cites several studies that show menopausal women have rates of sleep apnea three times higher than younger women, about the same rates as men. The authors speculate that the sleep related problems seen in menopausal women may have more to do with sleep apnea than other issues. This article also points out the possible benefits of progesterone in treatment of menopausal insomnia. Progesterone levels are highest during pregnancy, when sleep apnea is noticeably absent. Progesterone not only acts as a sedative-hypnotic, enhancing sleep, it simultaneously acts as a respiratory stimulant.

Ask your doctor if progesterone may be a possibility for you. Progesterone is FDA approved and has been shown to reduce hot flashes, help with sleep and has protective effects on the uterus. It has even been used to treat apnea. [4. Empson JAC, Purdie DW. Effects of sex steroids on sleep. Ann Intern Med 1999;31:141-5.] A small study has shown improved sleep in women who took progesterone as opposed to women who took medroxyprogesterone. [4. Montplaisir J, Lorrain J, Denesle R, Petit D. Sleep in menopause: differential effects of two forms of hormone replacement therapy. Menopause 2001;8:10-6] The safety profile of progesterone is well established and there is no evidence that it increases the risk for breast cancer.

How about you and I make a pact to get this sleep issue taken care of? For our sake and for our partners’ sakes.