What’s the scariest movie you have ever seen?

The Silence of The Lambs?

When I was 16, my best friend Mike Graff and I saw The Deer Hunter, which won the Academy Award® for Best Picture in 1978. In the film, characters portrayed by Robert DeNiro and Christopher Walken were forced, as prisoners of war, to play Russian Roulette in one of the most harrowing movie scenes I have ever watched. I say “watched” even though it was between my fingers as I held my hand over my eyes to at least partially block the shocking view on the screen. Mike and I were as white as sheets walking out of that theater after seeing men not much older than ourselves experience the horrors of war. Those images have been seared into my memory.

If you’ve never heard of Russian Roulette, it’s a repulsive contest that involves two participants and a revolver that holds six bullets but is loaded with only one. The first contestant spins the cylinder so that no one knows whether the bullet is in the chamber or not. Each player holds the gun to his head, pulling the trigger. In regular Russian Roulette (with one bullet), the chance that a player will die is one in six. If a second bullet is added to the cylinder, the chance of getting a bullet increases to two in six (or one in three) and so on.

What if I were to tell you that you, as a 50+-year-old, menopausal female, are playing a high stakes game of Russian Roulette with YOUR life? 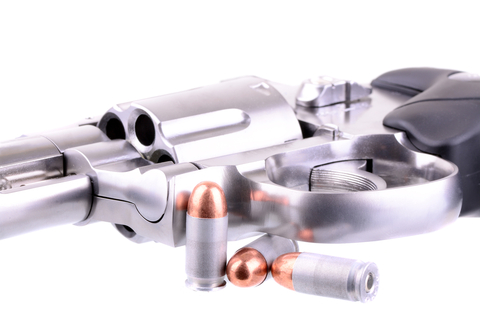 Yes – It’s a violent image! I understand that it’s uncomfortable. But hear me out. What I’m talking about is just as deadly as a bullet! As a menopausal woman, your odds of surviving are about one in two, the same as in this intensified form of Russian Roulette – with three bullets. While The Deer Hunter had a powerful impact on peach-fuzz-faced, 16-year-old me and my friend, Mike, this type of Russian Roulette is especially poignant for a 52-year-old woman.

The Russian Roulette I’m referring to is HEART DISEASE!

The World health Organization[1. http://www.who.int/mediacentre/factsheets/fs334/en/] and The U.S. Centers for Disease Control[2. http://www.cdc.gov/women/lcod/2011/index.htm#all] both report that Heart disease is the NUMBER ONE KILLER of WOMEN!

As a woman, your odds of DYING from heart disease are one in three (or one in four, depending on who you ask) over your lifetime.

After age 50, your odds of dying from heart disease increase to ONE IN TWO!

Women are scared of cancer, especially breast cancer, as they should be. But Heart Disease kills many more women than ALL forms of cancer COMBINED.

Your risk of dying from breast cancer is about one in thirty-seven. Applying the Russian Roulette metaphor to Breast Cancer would require thirty seven women, one revolver and one bullet. 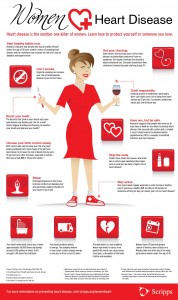 But Russian Roulette is completely about chance. The player who survives or dies can do nothing to change the odds that she will get the bullet. This is where the Russian Roulette metaphor breaks down because there ARE several things YOU CAN DO to avoid dying from heart disease, including not smoking, eating right, exercise, maintaining a healthy weight . . . Click on the infographic from Scripps that shows you several ways you can reduce your risk of heart disease:

The American Heart Association and Emmy-nominated actress Elizabeth Banks have created a hysterical little film called Just A Little Heart Attack about recognizing the signs of a heart attack FOR WOMEN:

Understand the signs of a heart attack. But that’s not all . . .

As I mentioned, your heart disease risk goes from one in three before age 50 up to one in two after age 50. It’s like an extra bullet in the gun.

What’s up with that?

One of biggest risk factors for heart disease in women over 50 is menopause. If your hormone levels are low, particularly estrogen levels, you will have an increased risk of cardiovascular disease.

When you talk with your gynecologist about hormone replacement the very first objection she may have is something like this:

I know that reduced estrogen increases your risk for heart disease. But the FDA has specifically warned physicians not to use hormone replacement therapy to prevent heart disease.

Your doctor’s objection is correct. The FDA has required a “Black Box Warning” on all FDA-approved estrogen containing hormone replacement products which states:

Black Box Warning: CARDIOVASCULAR RISKS: Estrogens (with or without the concomitant use of progestins) should not be used for the prevention of cardiovascular disease. The Women’s Health Initiative study reported increased risks of myocardial infarction, stroke, invasive breast cancer, pulmonary emboli, and deep vein thrombosis in postmenopausal women (50 to 79 years of age) during 5 years of treatment with oral conjugated estrogens (CE 0.625 mg) combined with medroxyprogesterone acetate (MPA 2.5 mg) relative to placebo.

For more on the FDA warning about estrogens and more information about the risks of NOT replacing your hormones at menopause, see my post Hot Flashes – Let Them Use Ice Water